When fitting a lens model using a pixelized source reconstruction, it is common for unphysical and inaccurate lens models to be estimated.

This is due to demagnified source reconstructions, where the source is reconstructed as the lensed source galaxy (without any lensing):

What has happened above is that the mass model has gone to an extremely low mass solution, such that essentially no ray-tracing occurs. The best source reconstruction to fit the data is therefore one where the source is reconstructed to look exactly like the observed lensed source.

In fact, there are two variants of these unwanted systematic solutions, with the second variant corresponding to mass models with too much mass, such that the ray-tracing inverts in on itself.

The following schematic is from the paper Maresca et al 2021 (https://arxiv.org/abs/2012.04665) and illustrates this beautifully: 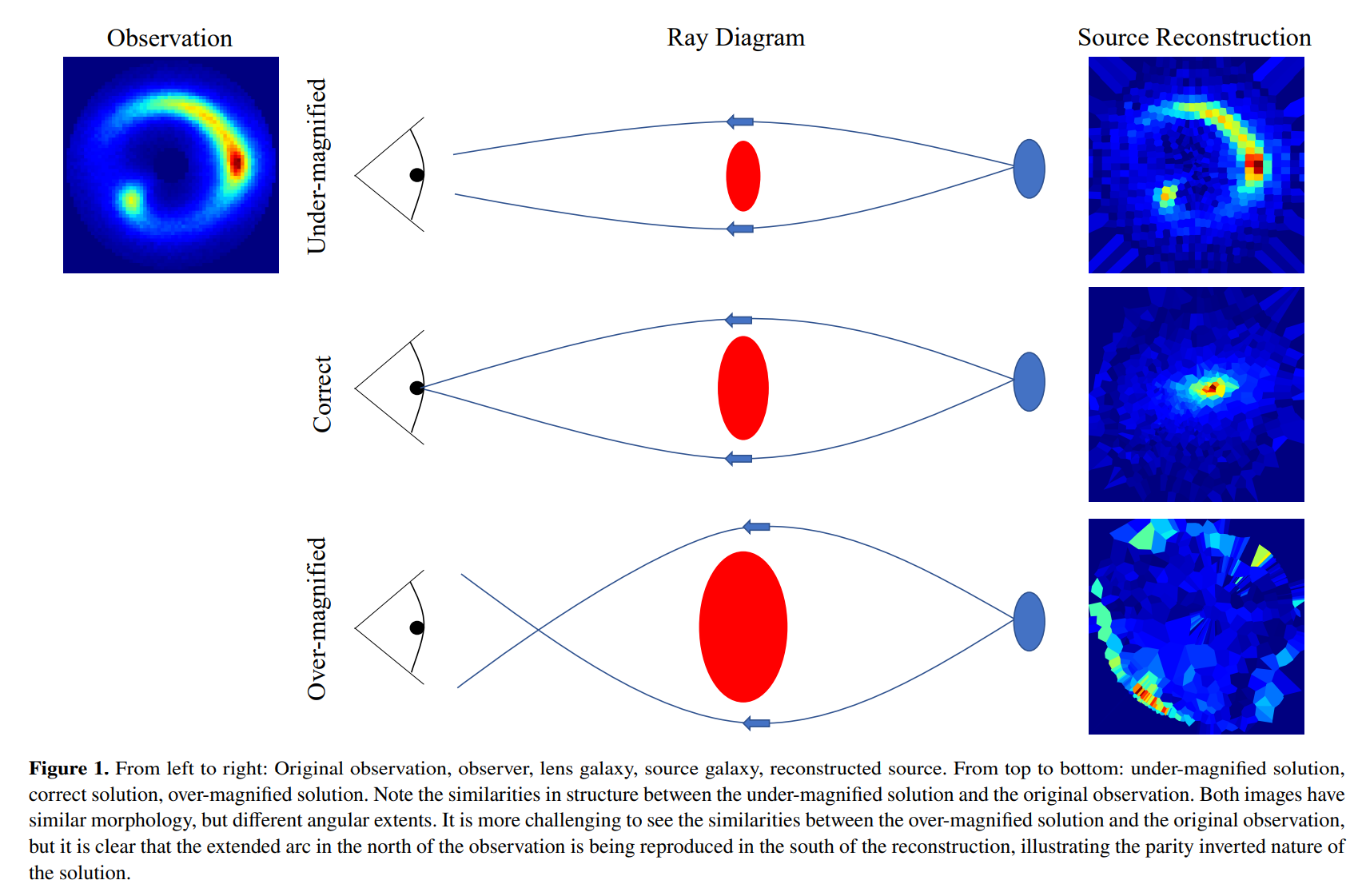 The source reconstructions and model-fits of these solutions are also illustrated by Maresca et al 2021: 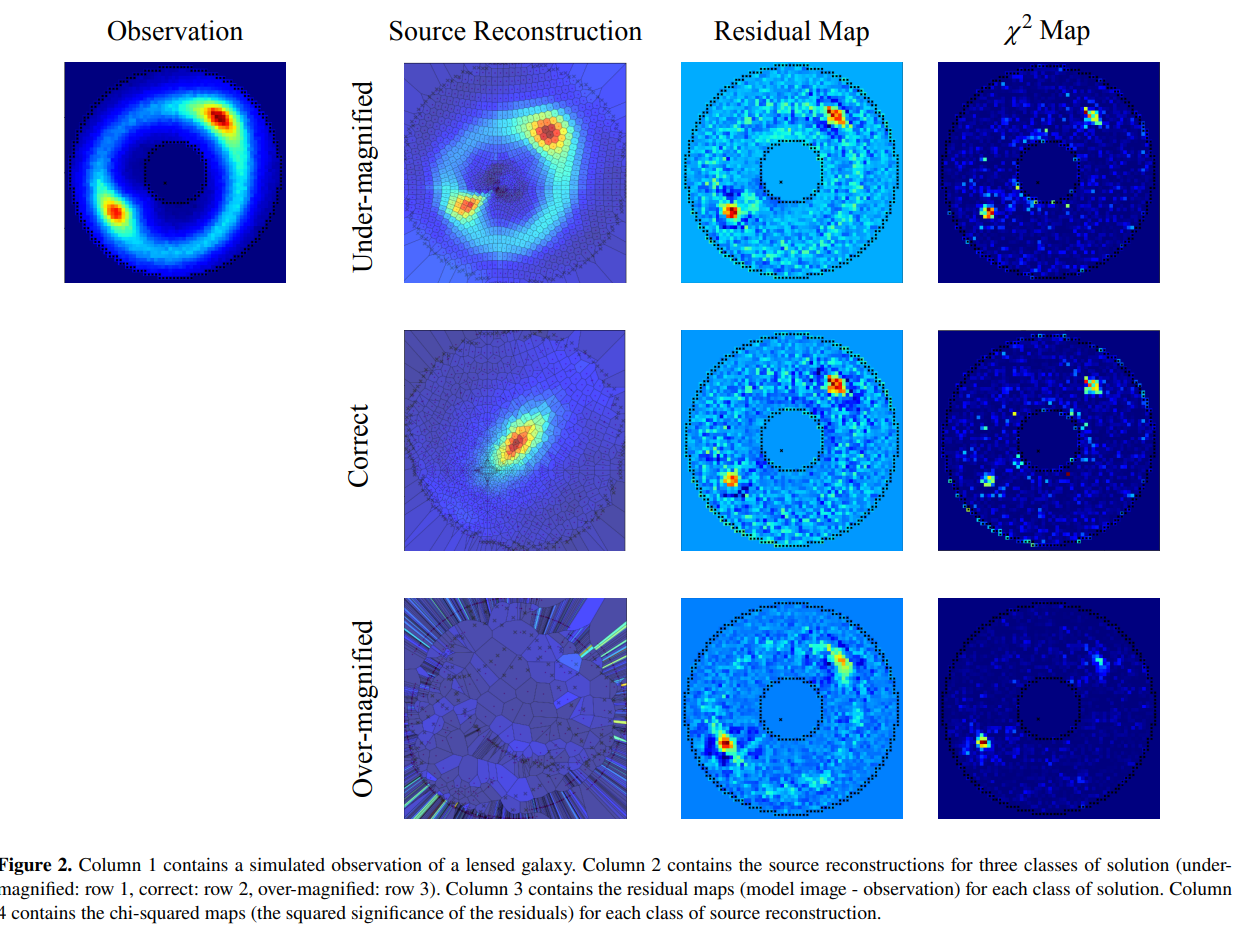 This means that when we fit a lens model, it is highly probable that all solutions correspond to demagnified solutions, such that the non-linear search converges on these solutions and never samples the accurate physical mass model.

To prevent a non-linear search from inferring these unwanted solutions PyAutoLens penalizes the likelihood via a position thresholding term.

First, we specify the locations of the lensed source’s multiple images, which the example code below does:

Next, we create PositionsLHPenalty object, which has an input threshold.

This requires that a mass model traces the multiple image positions specified above within the threshold value (e.g. 0.5”) of one another in the source-plane. If this criteria is not met, a large penalty term is applied to likelihood that massively reduces the overall likelihood. This penalty is larger if the positions trace further from one another.

This ensures the unphysical solutions that produce demagnified solutions have a much lower likelihood that the physical solutions we desire. Furthermore, the penalty term reduces as the image-plane multiple image positions trace closer in the source-plane, ensuring the non-linear search (e.g. Dynesty) converges towards an accurate mass model. It does this very fast, as ray-tracing just a few multiple image positions is computationally cheap.

If the positions do trace within the threshold no penalty is applied.

The penalty term is created and passed to an Analysis object as follows:

The threshold of 0.5” is large. For an accurate lens model we would anticipate the positions trace within < 0.01” of one another. However, we only want the threshold to aid the non-linear with the choice of mass model in the intial fit and remove demagnified solutions.

An alternative penalty term is available via the PositionsLHResample object, which rejects and resamples a lens model if the positions``do not trace within the ``threshold of one another in the source plane.

This is not the recommended option, as it is slower and can often lead to prolonged periods of the non-linear search guessing and rejecting mass models.

There are a number of downsides to having to input the mulitple images positions manually:

PyAutoLens allows the positions and threshold to be computed if a model for the lens mass is available.

This is the case for lens modeling pipelines which use PyAutoLens’s search chaining functionality, because the early fits in these pipelines fit a parametric source model which does not suffer these demagnified solutions.

We can also compute a threshold from the result, where this threshold value corresponds to the maximum separation of the result.image_plane_multiple_image_positions computed above but ray traced to the source-plane using the result’s maximum likelihood mass model.

The factor input is a value that the computed threshold is multiplied by. For exmaple, if a threshold of 0.1” is computed, the returned value above for factor=2.0 will be 0.2”.

These inputs are useful when using function to set the threshold in a new fit of a search chaining pipeline, as it allows us to make sure we do set too small a threshold that we remove genuinely physically mass models.

For writing search chaining pipelines, a convenience method is available in the result which returns directly a PositionsLHPenalty object:

This is often used to set up new Analysis objects with a positions penalty concisely: